The straight 8 is finally out of Covid jail and we trying to get back on the reassembly.
The engine is a 53 with solid/mechanical lifters and a manual transmission.
The rocker adjusters are severely worn and need to be replaced. The existing adjusters have the holes for oiling and all I can find for replacement are adjusters without holes.
It seams as though the adjusters would need the hole for solid or hydraulic lifters. There are oils passage in the rockers that align with the holes in the adjusters.
Can somebody school me on what is correct? 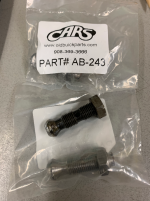 Rocker Arm Specialists may be able to help. Do a search.

Your Engine has solid lifter. According to the manual, the adjuster with the hole is for hydraulic lifters. That will be to supply them with an adequate supply of oil to stay pumped up. The hole is not required on solid lifters. I should have remembered, but the solid lifter has longer push rods which sit on the bottom of the lifter. There would be really no reason to move oil to the bottom of the push rod. The top of the push rod on the solid lifter engine is probably expected to get enough oil through vapors and splash. Using a hollow adjuster on it will supply it with more oil. It is quite likely no on bothers to produce a stud without a hole because there is little difference in the lubrication passage dead end in the rocker by the stud or move along and dead end at the push rod.