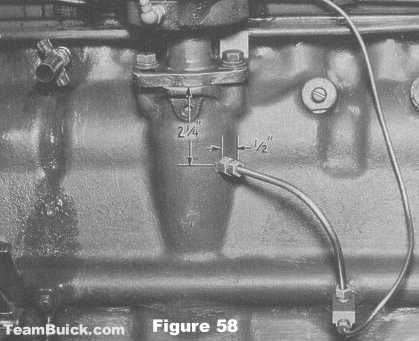 The oil pipe went into production on 70 series engine No. 46511567, therefore, it will be necessary to install the pipe, in the field, on all engines below that number.

This campaign does not apply to replacement engines except in cases where a camshaft and distributor gear failure has occurred.

Parts will be supplied to dealers by Zones and Distributors at dealer net price and AFA's will be accepted for the material at the net price and for one (1) hour of labor at 50% of the Dealers authorized hourly flat rate. The original restricted oil gauge line fitting Part #135628 must be returned to the zone office for each job AFA'd. 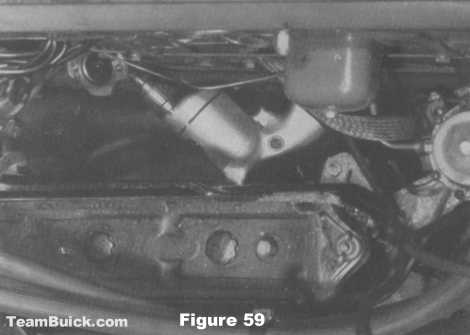 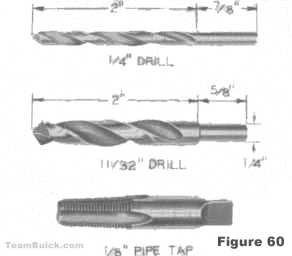 NOTE: If facilities are available the drills, as well as the tap used in the next step, should be magnetized to attract and remove the chips.

At the time the oil line is being installed to the distributor, the condition of the distributor gear and camshaft gear should be determined, and accordingly, should be continued in use or replaced.

The accompanying illustration, Figure 41, shows wear patterns on distributor gears in different stages of wear. The short and narrow tooth contact pattern is the best. As wear develops, the pattern broadens and lengthens but, the gear is still serviceable unless excessive wear shows feather edging or ridging of the teeth. Regardless of mileage, when the contact extends the full length of the distributor gear teeth, the gear should be replaced. 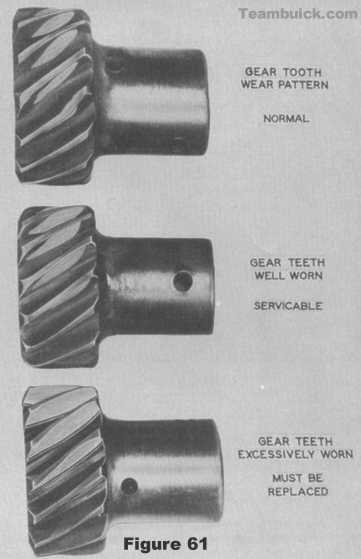 If the wear is excessive and the tooth has started to thin up (note ridge at the bottom of the tooth), wear is progressively worse under this condition and total failure is likely. In such cases both distributor gear and camshaft should be replaced.