The Relationship between Horsepower and Torque

PART 1:
Many people are somewhat confused by Tq, HP and what they mean to maximum performance and driveability. I'm reprinting an explanation I gave elsewhere and I'll expound on it a little bit. If you have any question or corrections, feel free to chime in.


You will often see the formula for HorsePower approximated as:
http://en.wikipedia.org/wiki/Torque#Derivation

This is deceptive. An easier to comprehend way to look at this is to transpose the formula to this:

If you look at it this way, the difference between "Torque Motors" (such as diesels) and "HorsePower" or "RPM" motors becomes clear. "HP" is always equal to the TQ at a given rpm multiplied by that "RPM factor" ( or rpm/5252 ).

Put yourself together a gasoline engine in a street car with a an rpm limit of, say, 5252 and you've got a 200HP gas engine.

Get on a high revving motorcycle that gets 200lbft but which can turn up to 10504rpm and you've got a 400hp drag bike.

Keep in mind when you look at a dyno sheet, because of the way HP is calculated, the HP peak is always higher up the rpm curve than the TQ peak. Generally speaking, the further apart in the RPM band that the TQ and HP peaks are the flatter the torque curve is.
Last edited: Jun 15, 2019
B

I will give you a very simple explanation, I can put a 3 foot breaker bar on the crank bolt and make 600 foot pounds of torque, but 0 BHP. Torque is force applied to rotate around an axis, once it starts to rotate you are doing work. If you can put a force of 100 pounds with a 1 ft lever at 5252 RPM on a water brake we call that 100 Brake Horse Power. You have to know the rate either in feet per second or RPM to know how much work you can do. Cars have drag horsepower, not drag torque. An engine that makes more power can be geared to produce more axle torque at 10 MPH than an engine with less HP. I am sure this will continue.
B

Horsepower is the rate at which Torque is applied / work is done, yes.

but it's still more fun to say:
Torque is how hard you hit the wall
Horsepower is how much of the wall you take with you.
R

About 25 years ago I built a number of worksheets to make it easier to do Racing related calculations. Here is a page with BHP, Torque, BMEP and the resultant forces to accelerate a car or Kart. Within any rational set of values, more HP accelerates faster. I understand what people are thinking. They equate torque with a long flat power band, and in some cases, say a 5 cylinder 125 cc Honda GP bike, you need a 12 speed transmission to stay in the power band.22 Hp @c22500 RP equaled 5.14 Ft Pounds. But in the end, if we design a RPM range, the most average HP wins, but it will also have the most average rear axle torque. We could stop using torque and say BMEP or Torque per cubic inch. Torque in and of itself does nothing, torque *RPM / 5252 equals BHP, if measured by a brake, and reaction arm we call it BHP. If we apply a force and a liner speed that is HP, no B. 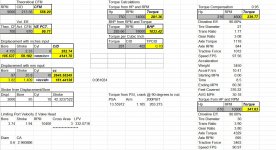 So to simplify, you can multiply torque with gearing, you cannot multiply Power. The reason that HP is torque x RPM divided by 5252 is that a 1 foot radius Arm on the crankshaft will make a circle of 6.28318 Feet x 5252 = 33000 Feet per Minute. James Watt, calculated a horse could lift 1 pound 33000 feet (thru a capstan and pulleys) in one minute.

my buddy with the Purdue enginerding degree was wondering what that number derived from.
R

my buddy with the Purdue enginerding degree was wondering what that number derived from.
Click to expand...

The Honda F1 makes almost 7 times as much torque per cubic inch than the Cummins !
C

Mathematically, horsepower equals torque multiplied by rpm. H = T x rpm/5252, where H is horsepower, T is pound-feet, rpm is how fast the engine is spinning, and 5252 is a constant that makes the units jibe. So, to make more power an engine needs to generate more torque, operate at higher rpm, or both.
R

HP Can also come from linear force. You are talking about Brake Horsepower where we use the reaction torque from a braking device x RPM / 5252
For Linear Force times Speed it looks like this; 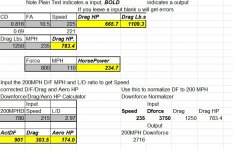 Something I read somewhere: If you have a bucket of sand and you can lift it by the handle halfway up your body, with one hand, this is called torque. How fast you can lift it is called horsepower. Basically, pulling power and how fast it it can be applied.
R

Hi kensgs, first off in the example above there is no torque being exerted on the sand that is a linear force. To apply a force of any kind there has to be resistance. Now in simple terms if the sand weighs 10 pounds it requires 10 pounds of force to lift it. The term Horsepower was invented by James Watt to equate the Power his new Steam Engines to a horse. Now of course 2 horses can be very different so "" "Watt found by experiment in 1782 that a 'brewery horse' could produce 32,400 foot-pounds [43,929 J] per minute. James Watt and Matthew Boulton standardized that figure at 33,000 foot-pounds (44,742 J) per minute the next year" .. 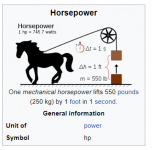 Now although there is a pully in the illustration it is used to change a horizontal force into a vortical force. Eliminating friction loss the pulley is not having torque applied to it.

So in lifting one pound of sand you are applying a vertical force of one pound. The strongest man in the world is generally who can lift the most deadweight. The most powerful human in the world has been considered to be Usain Bolt who can sustain 3 horsepower. So strength = force, power = power over a distance in a given amount of time. I think people, equate torque/force to the strongman, and power to the sprinter.
If you have a 24 inch bar, say a torque wrench to apply a twisting force of 100 pounds at the 24 inch mark that would equal 200 foot pounds 92 ft lever x 100 pounds force.)

If the above horse could hold the 550 pound weight that is 550 pounds of force. If he raises it 1 foot per second that is one Horsepower. I a motor vehicle Torque from the crankshaft goes through a transmission (that may or may not multiply the torque_ to a differential which will likely multiply the torque but not multiply the power, to an acle which uses the lever (tire radius) which then gets us to a horizontal force which moves the car.

So force * distance / time will tell us the unit of power HP. Disregarding friction, an engine with more power can always make more torque at the axle. Forget all this stuff i just typed up, look at the diagram

At BDC we are at c above and no torque is applied, for example a above it is when the connecting rod is at 90 degrees to the crank, and the rest of the time we are in the b example. When we use a brake to measure torque all these forces are dampened into an average torque. If we measure torque with an engine brake, at 5252 RPM we are moving a theoretical lever we are applying a force over a distance of 6.28318 feet. At 5252 RPM rounds off to a distance of 33,000 per minute or 550 feet per second.

None of this applies to the bench racing. That is back to a lot of folklore, not so much physics. So torque is a force applied to rotate, power is force times distance over time.
Last edited: Sep 18, 2022
R

bob k. mando said:
Horsepower is the rate at which Torque is applied / work is done, yes.

but it's still more fun to say:
Torque is how hard you hit the wall
Horsepower is how much of the wall you take with you.
Click to expand...

Horsepower is applying a force (linear, angular, or torque) of 550 pounds covering 1 foot in 1 second. And of course in a car, that torque has to be converted to a linear force at the tire contact patch to propel the car. My instructor at GM forced us to be very literal. Eg You supply power to a motor to do work. You supply Fuel to an engine. Oh and it is not a starter, it is a cranking motor,,, compression,, fuel, and ignition are required for starting. I often thought that if you looked up didactic in a dictionary you would find Instructor Schultz's picture!
B

you would find Instructor Schultz's picture!

otoh, if you ever run into an Engineerding prof who demands that you never refer to an Internal Combustion Engine as a "motor", get back to me. i can tell you how to strip all of the gears out of his head.
R

otoh, if you ever run into an Engineerding prof who demands that you never refer to an Internal Combustion Engine as a "motor", get back to me. i can tell you how to strip all of the gears out of his head.
Click to expand...

He would be well over 100 now, so I don't need any info s to how to strip his gears. He taught me a lot, I am forever indebted.
B

The Honda F1 makes almost 7 times as much torque per cubic inch than the Cummins !

i'd like to see you put a million miles on an F1 engine!
R

bob k. mando said:
The Honda F1 makes almost 7 times as much torque per cubic inch than the Cummins !