The following torques and torque patterns were compiled with the help of Todd.

Head bolts on the 263 as the head bolts are bottomed out and don't go into the water jacket. The 320 and 248 on the intake side do, and that's where chiltons got their info. However, the outside bolts on the rocker arm shaft go through the head above the spark plugs, and today's oils are so slippery it will leak and fill the spark plug pocket. Permetex #3 will seal the threads nicely, and the head bolts on 320's and 248's, and it should be done as I've had coolant sneak through the threads and into the oil. alleycat


Torque was 50-55 for the 61 and 62 models. The 63 model required 65-75. There was a Buick service letter put out many years later which raised the values on the earliest years of the 215. All years had 14 bolts. Post-torqueing is not specified. Perfect Seal is specified for all years. The tightening order is the same as the late model nailheads. 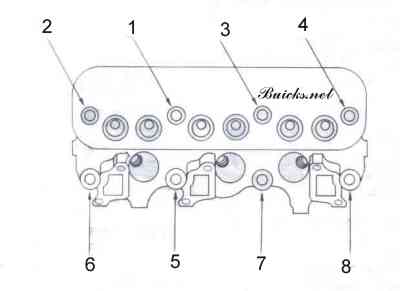 
In 1964 the 300 shows 14 bolts and used a torque of 65-70. It used the late model nailhead torque pattern (shown above). Post torqueing is not specified, Perfect Seal is.

It would be recommended to be at the upper limit for the 350.