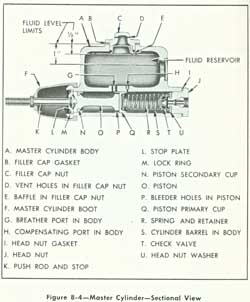 The master cylinder performs three functions. (1) It maintains a constant volume of fluid in the hydraulic system at all times, regardless of expansion due to heat or contraction due to cold. (2) It transmits the pressure of the brake pedal equally to the wheel cylinders (and brake shoes) at all wheels through fluid pressure built up in its cylinders. (3) It acts as a pump during bleeding of the hydraulic system.

The master cylinder is mounted on the inside of left front frame side rail and is operated by the brake pedal through an adjustable push rod. See figure 8-2.

The master cylinder body (A) consists of a fluid reservoir cast integral with a cylinder barrel (S) which is machined to house the working parts. See figure 8-4. A breather port (G) and a compensating port (H) permit passage of fluid between reservoir and cylinder barrel under certain operating conditions. The reservoir is closed at the top by a gasket (B) and a vented filler cap nut (C) containing a baffle (E) to prevent loss of fluid through the vent holes (D).